.
This website was opened on the 8th November 2008.
With 39,000+ individual visitors from 107 countries, this website has been viewed more than 88,000 times.
Wateringbury Remembered has touched every part of the world. It is a conduit to bring together memories of the village and its people. 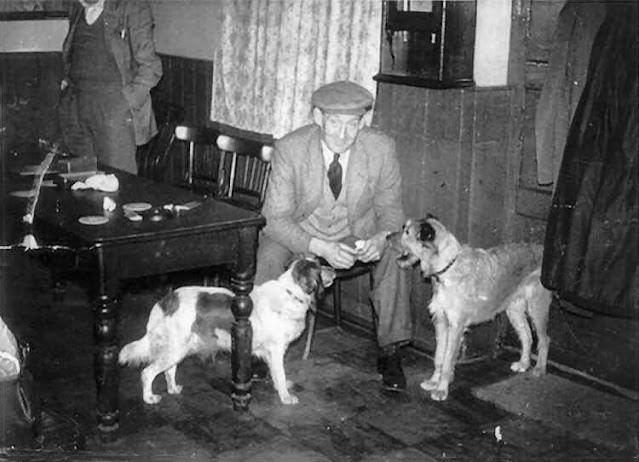 Mike Shepherd kindly sent us the above photo of his uncle Bill Shepherd in
The Harrow Pub in 1954
- January 20, 2021 No comments:

Here is story about the Whitbread tanker that crashed into the garden of No 5 Warden Mill Close:A memory can be  a very fallible thing and this story is told to the best of my memory.Our family moved into 3 Warden Mill Close in, I think, the summer of 1963; into one of nine surrounding, identical looking, two storied, detached red brick houses, with their asymmetrical pitched roofs.I have always wondered what inspired the architects and builders to create such roofs, perhaps a fashionable, ‘feature-istic’ architectural thought of the time, or a reflection of something local, even the shape of the asymmetrical vents of the local Oast houses.

Three Warden Mill Close was the first home that my parents owned. Earlier in the year we had moved up from Cornwall after my father had been posted as Trade Master for Submarines in the Engineering Division of the Production Department at H.M Dockyard, Chatham.As well as memories of arriving, a half empty house with no furniture in the kitchen, I have recollections of sunny days, and playing outside in the incomplete, and in places overgrown and undeveloped back garden, which at one end was bounded by the septic tank smelling, Mill Stream. At that time there was no lawn in the garden, but it came later, layered turf and then molehills. 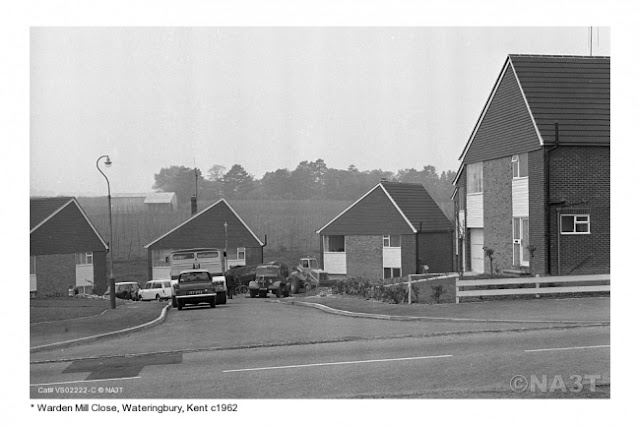 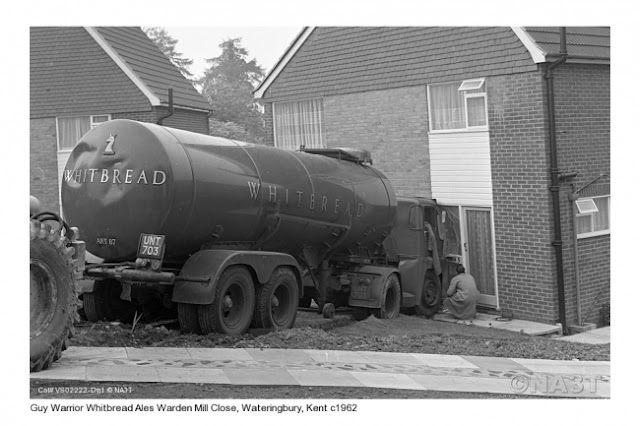 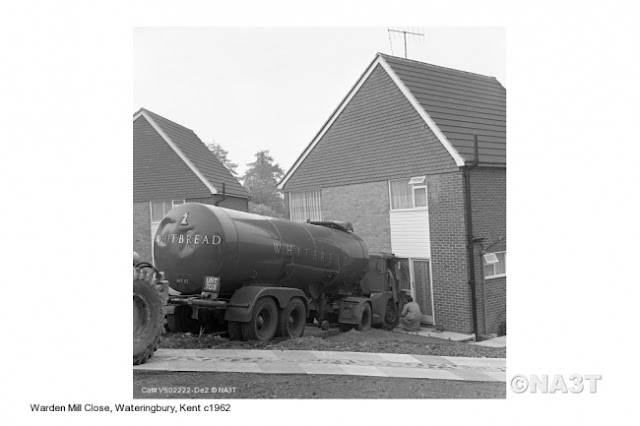 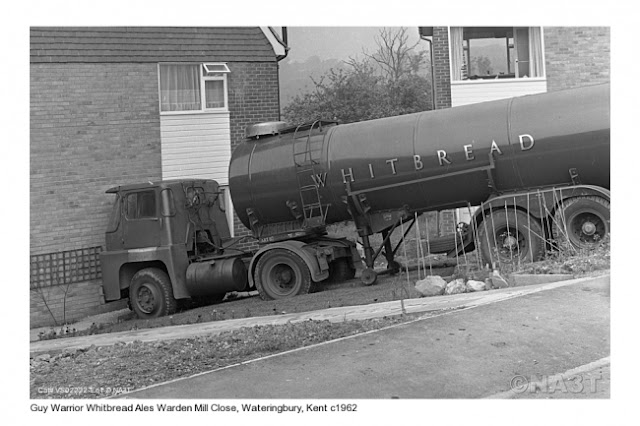 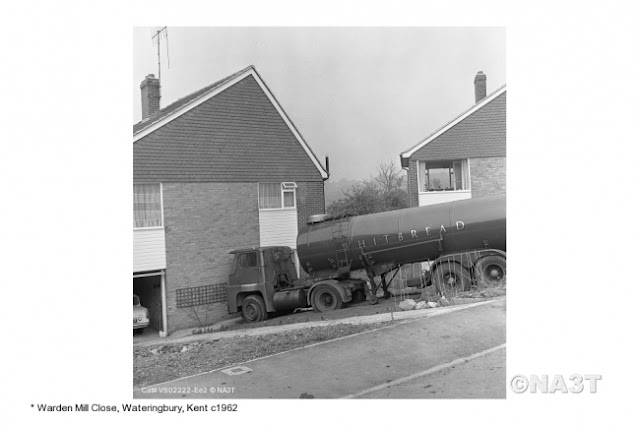 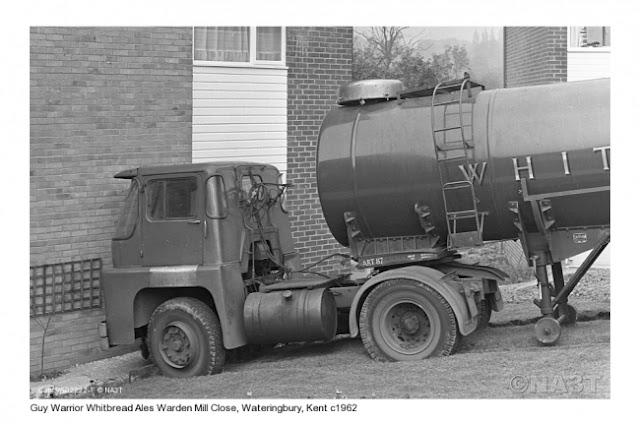 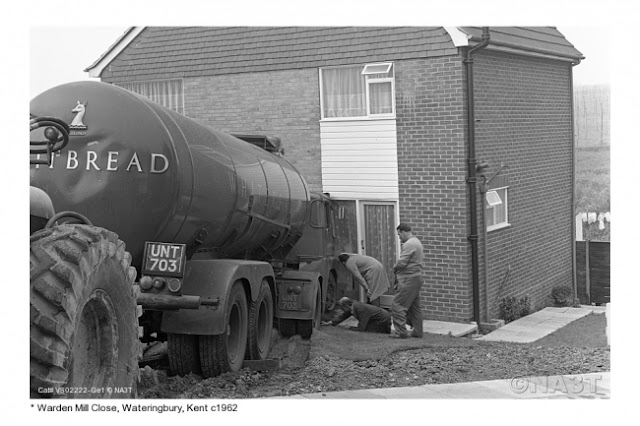 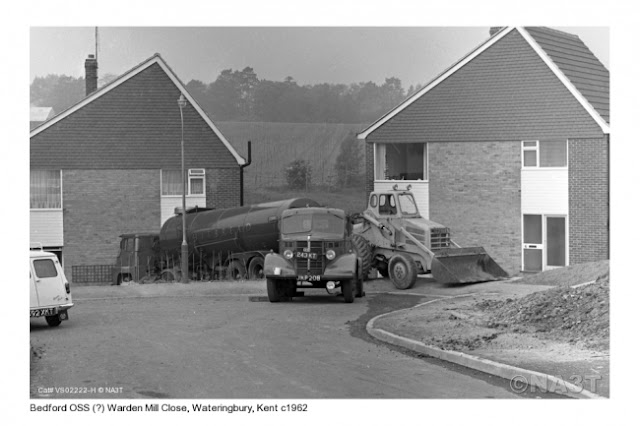 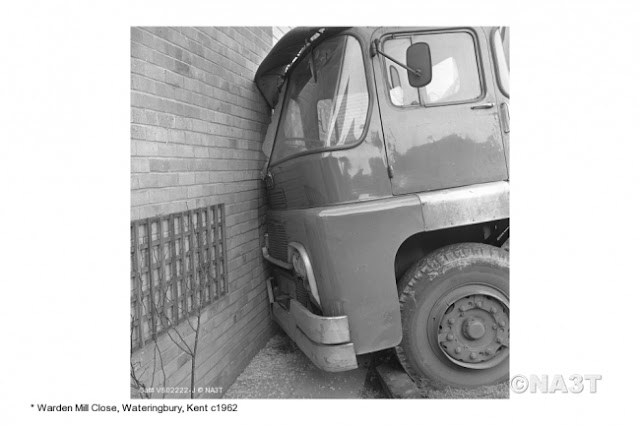 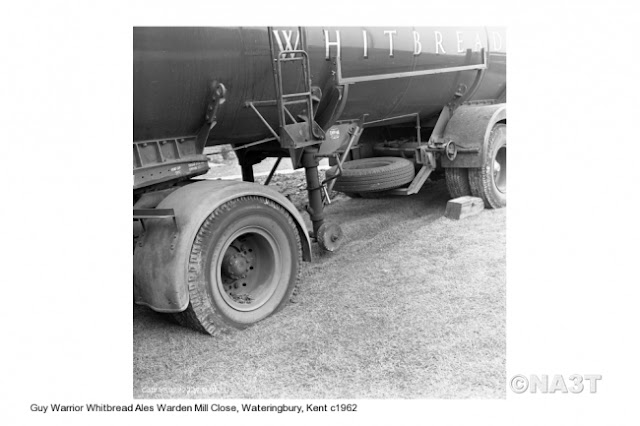 I have been looking at the sequence of photographs showing the recovery of the tanker.

The first in the sequence,  taken at the top of the close, on the other side Bow Road, must have been taken soon after the crash and shows the first tow truck and an excavator, which  I now remember was initially used to try and move the tanker.

Interestingly,  if you  enlarge the  photograph,  and look at the gap between the tow truck and  a person standing beside a vehicle, and on the right side of the lower lamppost outside No 5, you can see what looks like  an upright   saddle, a wheel and part of a frame; I think that this is the rear  side of my tricycle. Looking at it I can see that the tanker came quite close to where I left it.

The subsequent photographs of the tanker seem to show that its wheels sank into the lawn in front of No5, possibly reducing its momentum,  and preventing it smashing into and through the house.

The last photograph,  taken later in the afternoon  shows the arrival of the second tow truck and also the damage/marks left on the tarmac  by the first tow truck.

For some instinctive reason I think that the chap leaning against the lamp post with the jacket is the reporter I mentioned. I may be wrong.

Reassuring to find that my memory was  largely correct-there was more than one tow vehicle. and damage was caused to the tarmac.

Clive Long sent us the following:

My dad was born there and grew up in the school house with my nan and grandpa until he went off to join the Royal Air force. My siblings and I spent a lot of time there during holidays and I even attended the school its self for a couple of terms.

Here is my father's service record, as one of Wateringburys own, I feel very happy to share this as it's another great example of achievement from a small community. 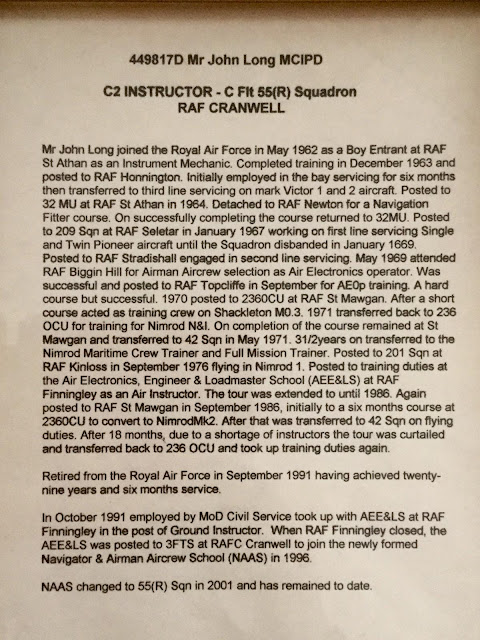 There are many references to Clive's father John Long and his family on the website and some can be found on this link:- 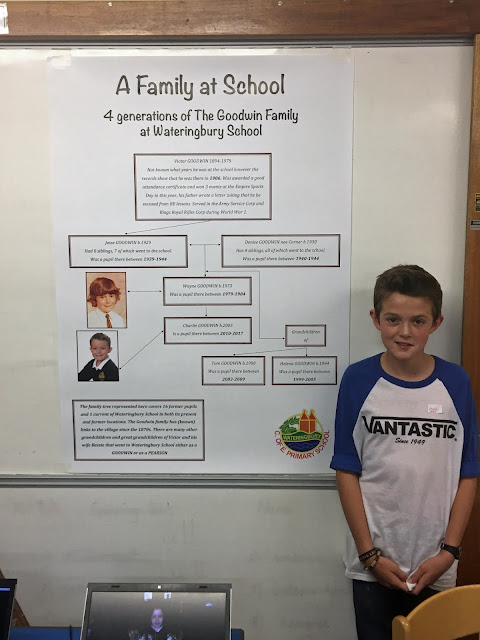 Hi, just came across your website as I’m about to move out of the village from a home on Glebe Meadow that’s been with family since 1976. This picture shows 4 generations of Goodwin’s being at Wateringbury school.

Richard Harvey kindly sent the following
I was involved in an interesting debate about Whitbread miniature innsigns on the More Memories of Maidstone Facebook page yesterday, which led onto some reminiscences about Wateringbury pubs, which also involved Eric Beadel. I sent the link to my sister, Anna, who lives in Northern Cyprus and who, like me, spent her early years at the King's Head,Wateringbury.

Anna has emailed me today with some lovely memories of life in Wateringbury immediately after World War Two, and I thought you might be interested in this edited version in which, quite rightly, she corrects one or two of my memories - but then I was only a tiny sprog, who has subsequently spent his entire adult life in journalism and is therefore bound to make a mistake or two!

Thanks and kind regards

I am 99% sure that John and Hilda Harvey never were the tenants of the King’s Head, but simply worked there to learn the ropes of running a pub. The tenants were the Strattens, possibly Dutch.

John became very friendly with Dr Severn, the village doctor, one of whose sons was a Battle of Britain pilot. They had a lovely Georgian house and surgery over the crossroads, on the right hand side going towards Tonbridge, with a swimming pool no less, into which I fell and nearly drowned!

During the war, John served as a Major in the Royal Corps of Signals, and Hilda and I moved to The Orpines, Wateringbury, probably in 1943 or 44. As I recall a grey stone manor house in large grounds with a huge kitchen garden. I think it is now a housing estate, but maybe the old house is still there.

The Pratt Boormans, who owned the Kent Messenger, lived downstairs after living in South Africa. Their son, Edwin, is responsible for my paranoia over snakes, having regaled me with some lurid South African tales!

The house was owned by an elderly lady and her daughter, the Hornbys. I recall mum saying they were very kind to her, and as they had a car were able to  take her to Fant Lane Maternity Hospital, Maidstone when 'her time came' for brother Richard to be born.

When John was demobbed in 1945, our family moved over the road to the King’s Head. Whilst there, I recall a travelling cinema coming to set up in the large hall at the pub.  It was freezing cold, but I used to sneak in the back and then have the wits scared out of me watching fearsome native indians about to put someone to death before Tarzan came swinging through to the rescue!!

Albert Jukes owned the garage next door to the pub, while his wife Doris ran the local shop at the top of the hill running down towards the river. Opposite was an old forge where we watched the smithy at work.

At hop-picking time, when all the Londoners came down, she used to erect a very high metal screen across the counter, and all transactions had to be passed over the top!

I started at Wateringbury Primary in 1945. Headmistress Miss Kellam Smith – shades of the Prime of Jean Brodie. She wore a pinstriped suit with a man's jacket and a skirt with  2 pleats at the front and 2 at the back & lace-up brown brogues. All topped with a short haircut…..

The school was situated at the top of Red Hill, and we walked to school every day. I remember the evil winter of '47, the worst on record, and coming out to the front of the King’s Head to find the huge in/out car park covered in frozen ruts which the cars had churned up. I literally had to cross it on my hands and knees and then walk on to school.-.at just 7 years old!

Ice and rubber-soled wellie boots don't mix, and don't even mention the chapped legs!  There were the usual snowball fights, and long icy slides in the playground of course, but worst of all was that the toilets at the back of the playground had frozen solid, so they had to bring in Elsan chemical toilets which could only be placed in the cubicles with the doors wide open!! On the way back to the classroom, I would break an icicle off the asbestos gutter for a lolly!

Some little time after the war ended I recall a Pageant being held at the big house. which I now presume as being Wateringbury Place. We little girls had to dance round the maypole in our prettiest summer dresses. and the rest is rather hazy but I do recall lots of stretchers laid out with soldiers on them. Perhaps the house had been requisitioned for a military hospital? Could have been celebrating V.J Day.

First, Mum grabbing me by the hand, and rushing along through the village to the grocer’s shop on the left, out past the doctor’s house, saying “Hurry, hurry,I have heard they have got bananas in”. What’s all the fuss, I thought. What’s a banana?

And secondly, dear old Mrs Jukes. When she finally got a delivery of ice cream, she instantly sent a message up to the school with this news. All lessons stopped. Teachers lent us all a penny each, and soon after a basket was sent up (perhaps her son on a bike) full of those little Lyons Maid cylinders that sat in the top of a cone. But no cone, just the delicious ice cream! What a sublime treat.