In the 1950's there were eight Pubs in the village (counting the Railway which I consider to be Wateringbury buy is in the Nettlestead postal area)
.
The Kings Head
This sign was never used on the original Kings Head at the crossroads. Both inn signs are from the new Kings Head.
. 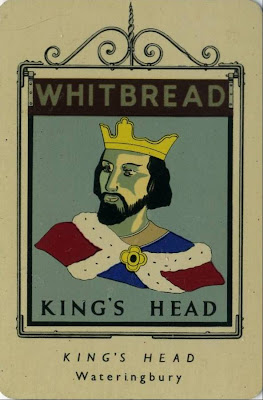 .
The original Kings Head Hotel Wateringbury
The Kings Head originally stood on the cross roads and dated back to the 18th century it was originally a farm house owned by Thomas Luck. William Croson was the inn keeper in 1754. On the 27th December 1876 it was sold to Frederic, Charles Frederick and Augustus Leney for £3100. Queen Victoria is said to have stopped there to enjoy a meal on her way from London to the coast. It closed on the 17th February 1938 to allow for the road to be widened.
. 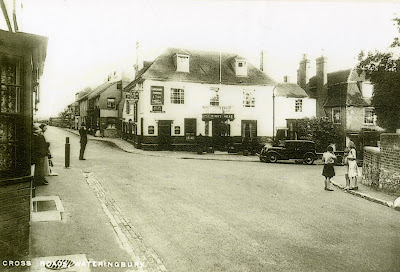 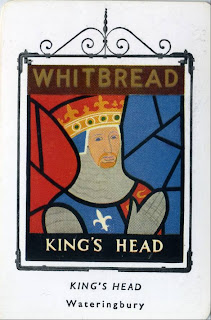 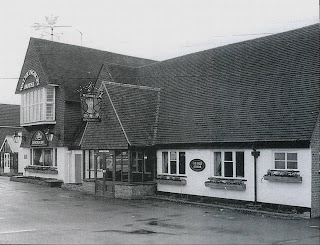 The Weather vane that can be seen on the Kings Head above was the original from the Phoenix brewery when it was demolished. The storm of 1987 blew it down from the roof here and it was sent away for repair and then lost. Today there is a smaller replica on the Kings Head
. 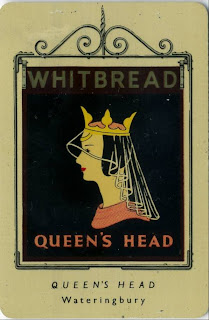 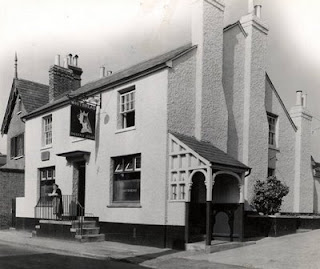 
Located at No 232 Tonbridge Road to the west of the cross roads The Queens Head Wateringbury was a small public house with a Public Bar, Saloon Bar ans Off sales window. The Queens Head closed in 1976 an has since been converted into a private dwelling.

The picture above shows the pub as I remember it right up to when it closed it looked the same.

A pump house in an out building at the rear of the pub supplied water from a well in the back garden of the nearby Gransden House to the Jude Hanbury Brewery which was at the top of Bow Road and is now a residential road called Hanbury Close. Mr Jude lived in Gransden House. Jude Hanbury was later sold to Whitbreads.

As a young lad my Mum and Dad, myself and my brother Brian would often go for a walk on a summers Sunday evening ending up at either the Harrow or the Queens Head where Dad would go in to see his friends whilst Mum, Brian and myself would sit on the wall outside the Public Bar. The wall surrounded a large laurel bushes. Dad would bring us out a drink of Vimto and cheeslets or crisps, sometimes a bar of Fruit & Nut Chocolate. I remember a fight spilling out into the car park on more than one occasion.

When a little older around fourteen I remember going to the off sales on a Sunday lunch time with an empty bottle to get a pint of mild to make shandy with to have with Sunday lunch.

The gent's toilets were outside right up to the day the pub closed and I remember them being frozen solid some winters. Though these did have running water which was a great improvement on the original gent's which were no more than a wall, this can bee seen on the photo above, it is the low wall to the left of the steps. I believe it is still visible on the house as it now is.

As a teenager the Queens Head became my local pub and I remember we had a brilliant landlord Bill & Hilda Munday (photo below) who would always buy his customers a drink. There was a juke box and bar billiard table in the saloon and dart board in the public but I only used the saloon.
. 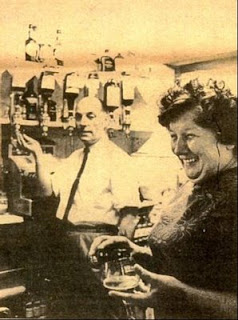 .
.
The Queens Head a few years before looked like this
. 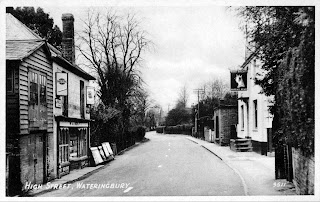 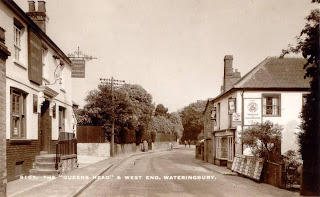 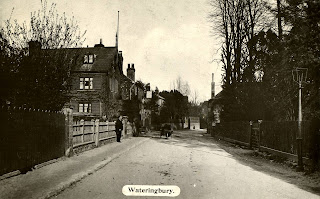 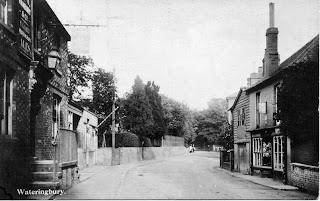 The Duke Without a Head
. 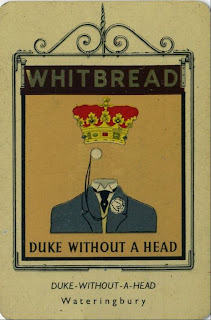 .
The Duke Without A Head Wateringbury photographed probably 1960's before being demolished in 1990. The pub stood on the outer edge of the village on the Tonbridge road. The name came about when the licence was transferred from the original 'Dukes Head' the licence stated "Permission is given to remove the Duke's Head" The renaming ceremony took place on 16th December 1940. The former "Dukes Head" is now a house and still stands in Pizen Well which was originally directly behind the new building.
. 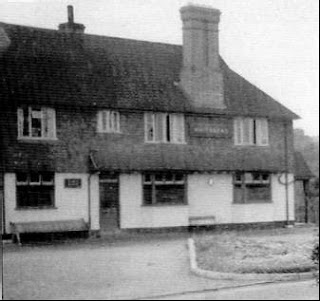 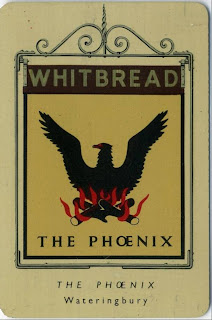 .
The Phoenix Wateringbury was situated half way up Red Hill on the right and today is a private dwelling. The pub closed on the 21st January 1957, it was sold for £1200. It took its name from the Phoenix Brewery in the village.
. 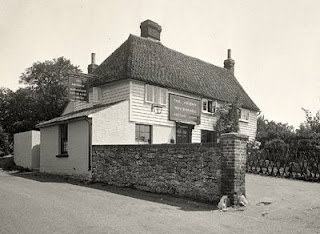 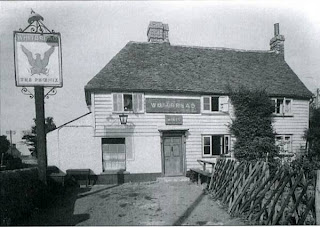 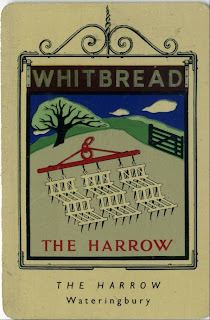 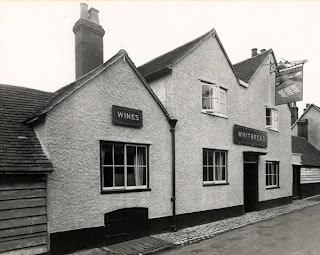 .
The Harrow was closed and converted into a house in 1968. It stands on the side of Old Road which was was the main road to Tonbridge until the "new A26" was built. At one point in the 1930's my Grandfather Frederick James Gilham ran the pub.
. 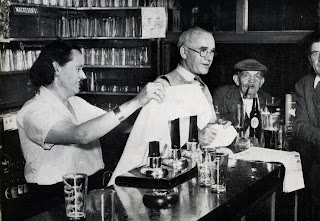 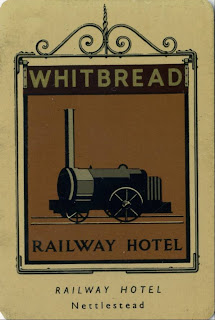 .
The Railway Hotel was technically Nettlestead but right on the border. The pub is still open and looks much the same structurally. It was once called 'The Kent Arms' but the name changed in 1875 when the Maidstone to Tonbridge line opened, though the railway line came to the village on 25th September 1844. The Railway always flooded and I remember in 1968 and 1974 in was particularly deep.
. 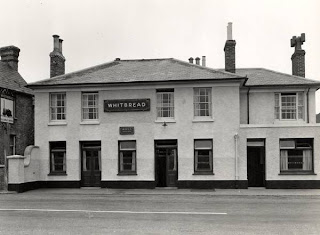 .
A much earlier Photograph.
. 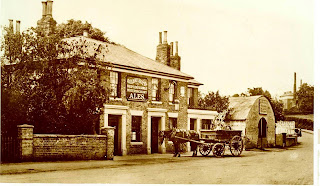 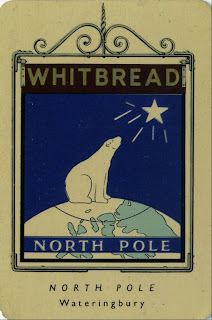 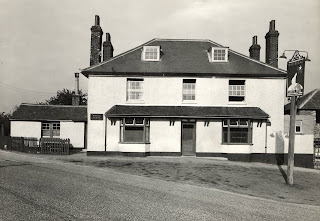 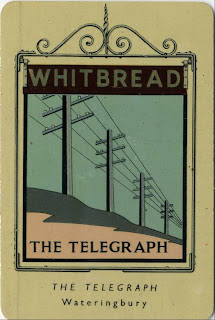 .
The Telegraph Wateringbury is in Bow Road and this is the pub where I tried my first half pint of Bitter with my best friend and his dad. I didn't enjoy it too much then but I have persevered and I now enjoy a whole pint!
Bill Green was the Landlord and he used to say the only way the brewery would get him out of the Telegraph was in his box and that is how it was. Bill ran it from 28th May 1951 until it closed in around 1975. The pub then stood empty for years and was later demolished in around 1989.
. 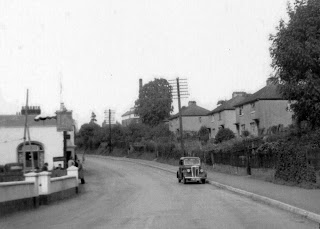 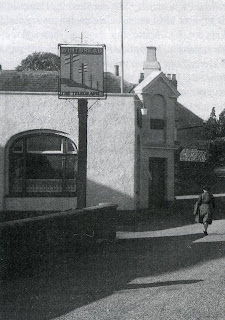 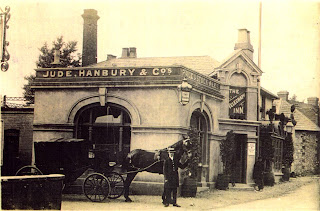 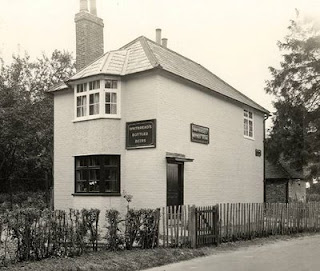 .
The Fir Tree stood at the top of Cannon Lane until 1938/9 when it was demolished to make way for a larger West Malling Aerodrome. It was known as an Ale House and run by Edward & Gladys Kirby. I dont have an Inn Sign for it as I understand there never was one produced.
- January 28, 2009

I have a stack of metal or paper Whitbread sign cards, one from the Railway Hotel in Nettlestead and another is from The Harrow in Wateringbury. My mum grew up in Nettlestead and my grand-dad (Harry Manser) was employed by the railroad at Wateringbury. He was a platelayer at her 1922 birth and my older sister says he became station manager before he died in 1955