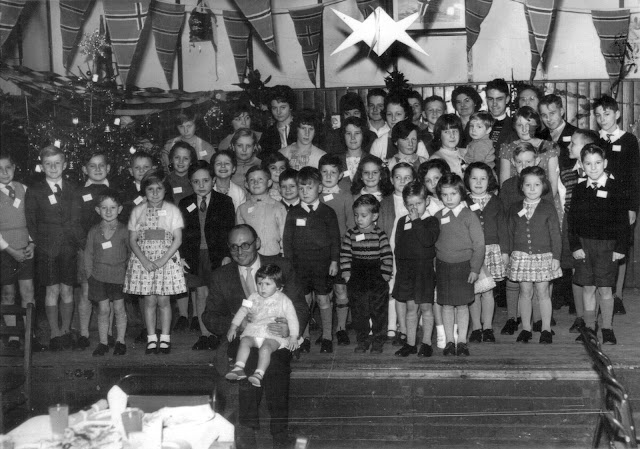 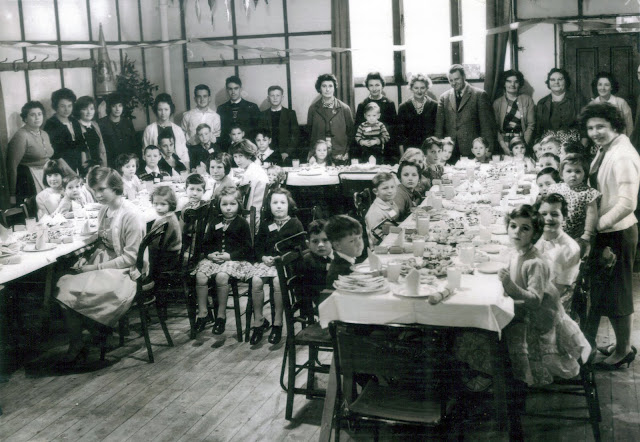 Photographs courtesy of Steve Latter
Steve kindly sends the above two photos from his mums collection of the Whitbread Brewery workers, children's Christmas party of 1961/1962.

This looks like the inside of the old village hall as the stacking metal seats and the stage seem very familiar.
I think the children on the inside left seating are four members of the Selman family, possibly the boy is Roger and the girls include Silvia and Brenda who is sitting in the corner seat. I should be able to recognize more but cannot put names to faces. Can you help?
if so email me: john.gilham@mail.com
:-:
Glynne Knight kindly adds some names -  in the top photo I am sure that is me in the extreme right hand corner at the back in West Borough Primary School uniform. In front of me in the very front row, again in uniform, must be my brother Ivor. Front row 2nd. from left I think is Trevor Brown, in front of him the short boy in the front row could be his brother Keith. Who is the boy in the dark jacket, 5th. front left in front row, I should know him, but my memory is not so good these days.
:-:
Couple more comments on the Brewery photos.
Top photo, 2nd. from right in the back row (with the quiff) next to me is John Saunders.

Further to Diane Hayes' comments, Revd. Donald Bish would not have been there, unless he was visiting for some reason, as he didn't arrive until the late 70s. Wateringbury vicar at the time would have been either Canon Soare or Revd. John Henderson (probably the later), but neither of them are in the photo. Anyone help?

(John Webmaster) I think the boy in the dark jacket, 5th from the left in the front row (top photo) is Andrew Hubbard. Also (top photo) the girl in the middle second row from the front could be Susan Large? third row from front again almost in the middle white cardigan with square pattern on her blouse could be Sandra Selman with her brother Roger just in front of her to the right and next to who I think is Susan Large.
I believe Roger Selman and his two sisters Sandra and Brenda are also on the second photo in the left hand corner of the table, backs to us but looking at us.
:-:
Diane Hayes adds some names to the above photos and has spotted that in fact both pictures were probably taken on the same day and on closer inspection we can see children wearing the same clothes in both photos. Well spotted Diane.
This is what Diane says:-
-
Standing left hand side Audrey Hatwell, then Yvonne Neal, Helen Stolton, Carol Hubbard
next not known, then Hank Clout, Colin Horton x x x Revd Donald Bish Audrey Greenwood,
Gladys Smith, Irene Hubbard x. This was taken in the old village hall at Wateringbury.
On the right hand table on the left three down a blonde girl that is a Shrubsole but cannot remember her name.

The one with all the children standing, the chap is Mr Munro Head Brewer, I think the
photo was taken on the same day as the other one what do you think?

Hi, Photo 2.. I am the girl on the left and my baby brother Gary is sitting on my lap my brother Adrian is sitting next to me, you can see him better in the top photo 3rd boy on the left, my elder brother Rodney is at the back in a white shirt next to Carol Hubbard.in the top photo. The girls sitting in the middle of the tables are Jacky and Margaret Smith top photo is Margaret Jones next to me on the left. We all lived in Phoenix Cottages next to the Railway Pub. My Dad was Alf Streeter and worked at the Brewery.  My Parents lived there for 52 years 1950-2002 my dad died 2013 and mum died 2014. Wonderful memories of my childhood.

Email ThisBlogThis!Share to TwitterShare to FacebookShare to Pinterest
Newer Post Older Post Home
Apologies for the different look to the site but security issues with third party items meant a complete reload of the site and some items were sadly lost in the process. Some of the formatting has changed in this process and photos and print have changed size but please bear with us or double click the photo to get it full size.