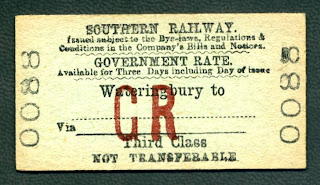 Wateringbury Railway Station is still much as it was when I was a boy but of course it is not occupied in the same way. It used to have a resident stationmaster Mr Mayes and Ken Philpot worked at the station. There was a ticket office with a real fire in the winter. The signal box must be one of the last to be used in a village but I am sure someone can confirm or put me right. Today the signal box looks like the photo below and the signal man still opens and shuts the crossing gates by hand. 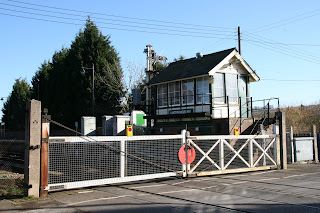 Below is a much earlier photo but as you can see the major change is the train was then steam. 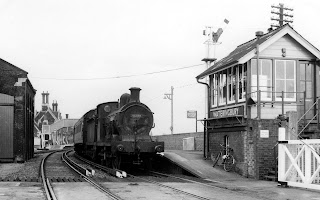 The platform and station building as it is today. 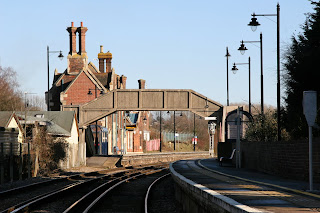 As it was below, the key difference being the Paddock Wood bound platform waiting room has gone and there is no foot bridge. I think the footbridge was a standard design as it is the same as the plastic one I had in my Hornby Triang train set! 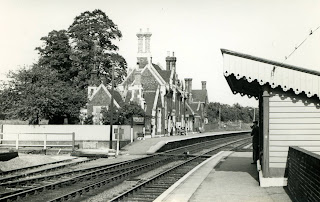 Not sure what year the concrete bridge arrived but it is not in the above but is in the photograph below and I am sure is still in use today. The photo immediately below seems to have been taken in May 1961 and the Hop Pickers train below was taken in September 1952 and the bridge is absent then so the bridge must have arrived sometime between 1952 and 1961. Does anyone know exactly when?
.
Anne Stephens, Nee Mayes writes from Adelaide South Australia


My father was Station Master from 1956-1960 .When we arrived there was no footbridge but it had been there for a year or two when we left so would suggest it was 58 or 59. regards Anne s,
. 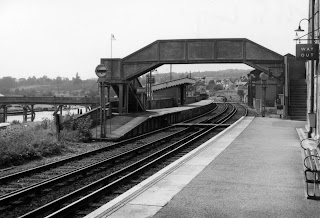 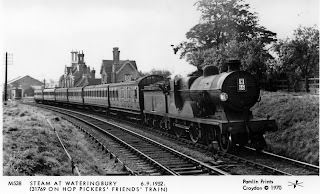 -
Other than use it when young, mainly to go to Maidstone, I don't remember much about the station. I will need your help to make this section more interesting.
- 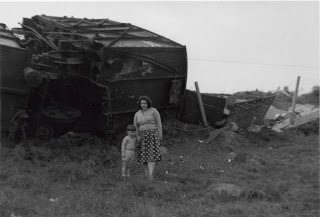 -
One event I do remember was a goods train derailment just beyond the crossing on the Nettlestead side of the station. The above picture was taken of my Mum and brother and probably dates it around 1965/66. We all went home with cans of fruit that had spilled out all over the bank.
- February 17, 2009