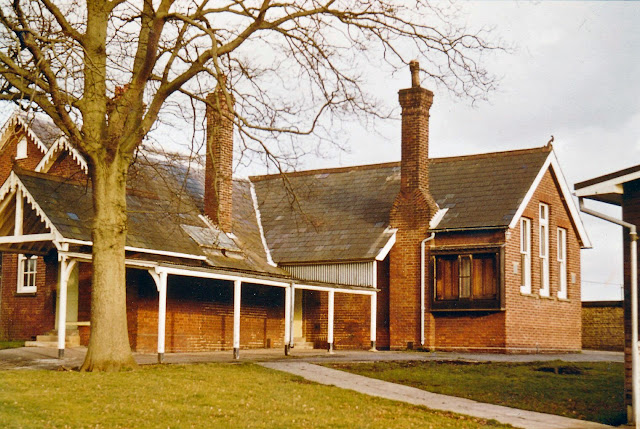 <>
This was taken in the early 70's but shows the school as it was when Robert and I went there in the 60's. The building just showing on the far right wasn't there in the 60's and that was all grass where we played in the summer.  The Oak Tree is still there today now in someones garden and below is Robert sitting under that Oak for his school photo. I have a similar shot of me.
<> 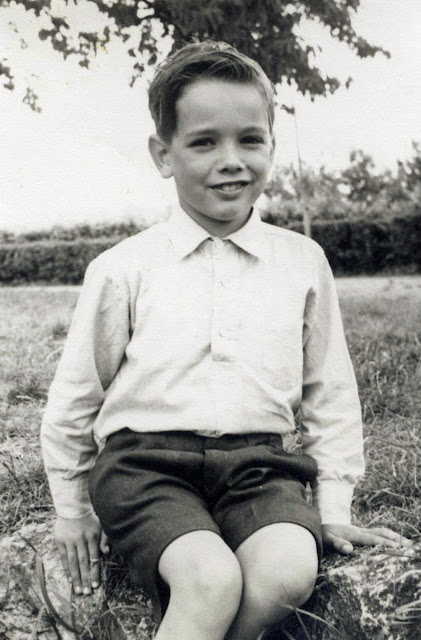 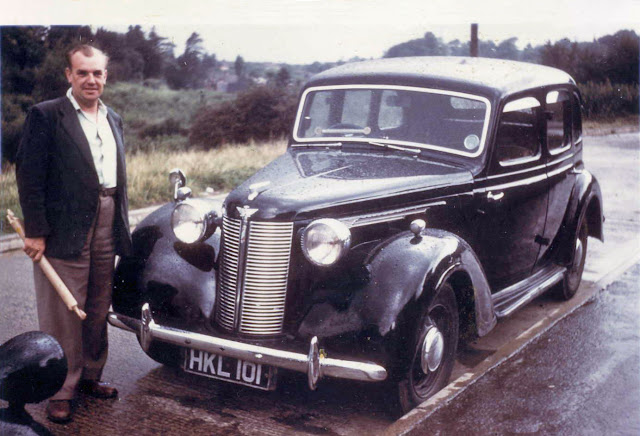 Roberts Dad with his car outside 12 Glebe Meadow 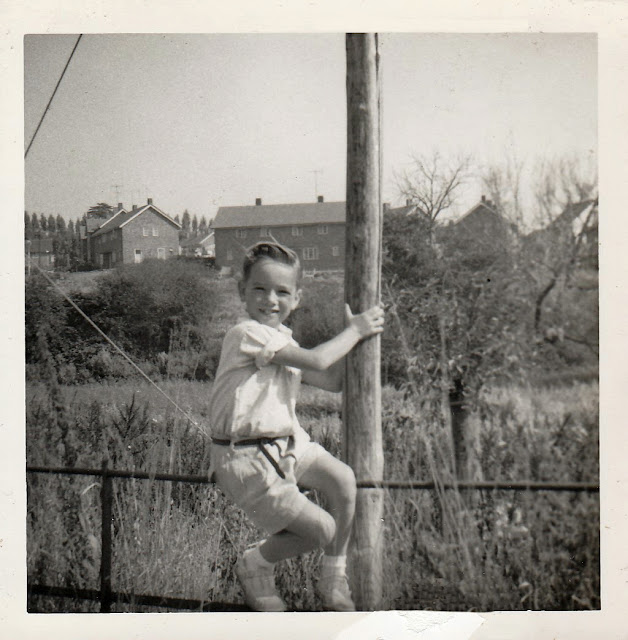 <>
This is Robert taken on the Mill Track with Glebe Meadow and his house (No12) right behind him.
<> 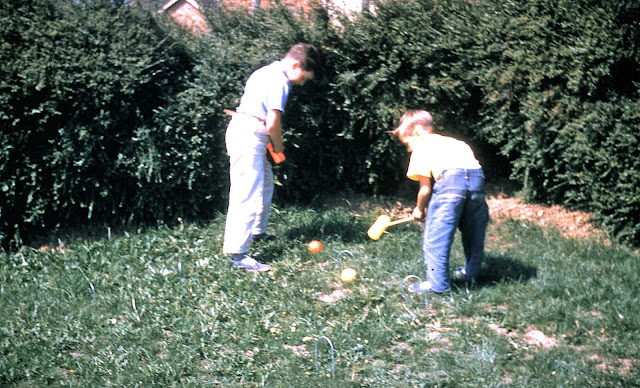 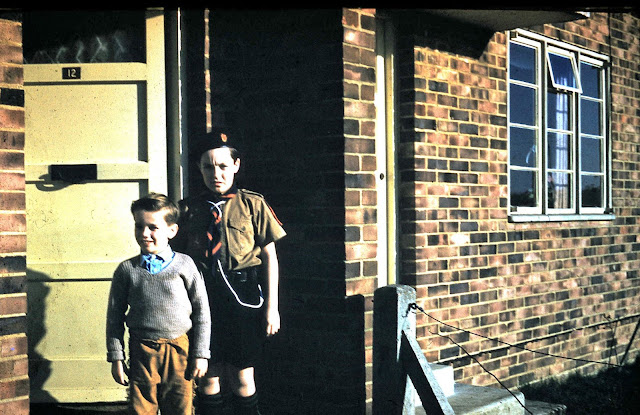 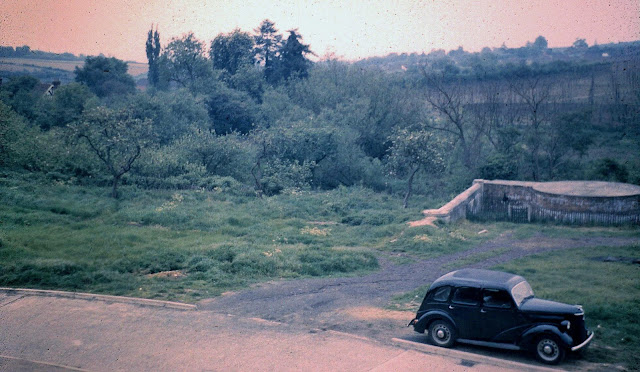 <>
The picture above and below show the cesspits for Glebe Meadow before the estate was connected to main drainage. Strange to think as children we would run along the inlet pipe and play on top of these and sometimes kids would fall in!. There were concrete hatches on the top that were slid off when the lorry came to pump them out, these lids were broken and the smell!
These cesspits were just built of brick and concrete and leaked. The area in front was known as 'The Grass' by us local kids and there was a sand pit which was sand left from building the estate. On this ground now are the row of bungalows for the elderly.
Beyond are the hop fields.
<> 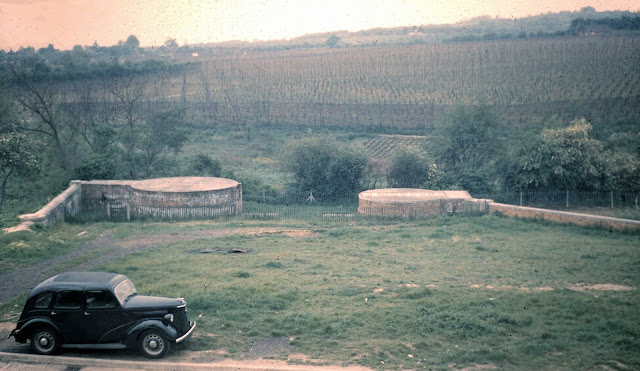 Photos courtesy of Robert (Bob) Newberry
Roberts words from another posting.
My mother and father moved frequently when I was young, so I went to a number of schools, especially primary.
This photo is of the old primary school in Wateringbury, just outside of Maidstone that used to be on the road leading to the North Pole. I know it has long since disappeared under houses, but the old layby/pull in is still there.
As with many of my old schools, they were always gloomy inside with the windows up high so you couldn’t see out. It probably for the best however that your concentration didn’t wander to much as I remember one teacher in particular, had a habit of throwing the blackboard ‘rubber’ at you with the force and speed of a Roger Federer serve!
I was always week at ‘sums’ (maths). My one attempt at playing ‘hookey’ failed miserably. We were having a maths test so I made my excuses to go to the toilet. The caretaker caught me some minutes later hanging about in the corridor. I can’t remember what my punishment was, but I’m sure I didn’t enjoy it.
I do remember there were many posters and pictures on the walls of dinosuars, map of the British Empire (that picture may be smaller now) etc. One especially stays in my mind. I have always loved history since mum and dad took me to see ‘Ben Hur’ in 1959. On the wall was a photo of a Viking War chief with a long ship in the background. I was always puzzled by this photograph because even with my peanut brain, I was sure they didn’t have cameras in the dark ages! I have long since realised that the photo was from the film ‘The Vikings’ with Kirk Douglas as a sort of ‘Eric Blood Axe’ After a day pillaging in Maidstone (do you think anyone would notice?) I would quite happily carry off Janet Leigh. But I digress! I spent a long time looking at that picture and wishing I was sailing up the Norwegian Fjords and not sitting here!
Funny thing, childhood memories. I hated school, i couldn’t wait to get home to Mum and Dad. I wasn’t at Wateringbury long, I think it must have been circa 1959/60. The photo was taken in the 1970’s. I can’t remember any names of class mates.
- February 07, 2020

Newer Post Older Post Home
Subscribe to: Post Comments (Atom)
Apologies for the different look to the site but security issues with third party items meant a complete reload of the site and some items were sadly lost in the process.