.
This website was opened on the 8th November 2008.
With 38,000+ individual visitors from 107 countries, this website has been viewed 88,000 times.
Wateringbury Remembered has touched every part of the world. It is a conduit to bring together memories of the village and its people.
Please contribute anything you may have, either memories or photographs that you are happy to share with like minded viewers.

Email anything you have to: John.Gilham@mail.com

Ray Cattle kindly shares another photo of his cottage as it was circa 1900.
Are there any others out there? 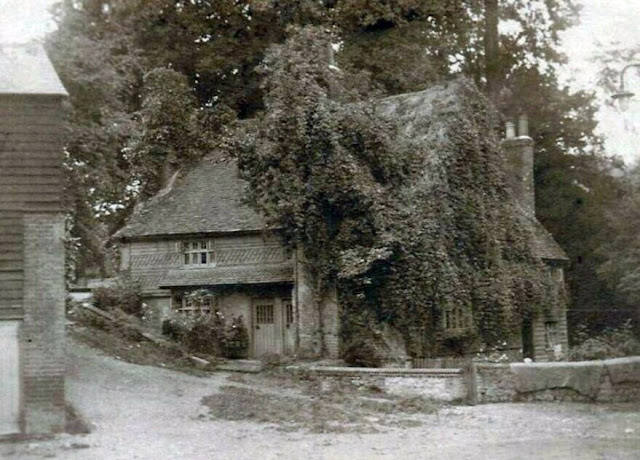 From Wateringbury to Australia in 1969


We  had a lovely email from Bernice Richards (nee Williams) as follows:

My name is Bernice Richards (nee Williams) and I live in Sans Souci, New South Wales, Australia. I have just spent a lovely afternoon after accidently finding your website about the history of Wateringbury. I am currently writing some memories down for one of my daughters and as I was answering her question, I needed information about where we lived, so I googled Wateringbury and your website came up.
My family moved into Redhouse Gardens, Old Road when the houses in that estate were first built, we were number 1, my father gave the house a name, Amore, but I think that would be long forgotten now. He was the Doctor in the village, Dr David Howard Hiley (he was my stepfather) and my mum, Dorothy, was a nursing sister in Maidstone. I had forgotten who his partner was in Wateringbury, but your website reminded me. The surgery would have been in Claremont House and the other doctor would have been Dr Miln. I remember getting off the bus from school in the afternoons and going for a swim in their pool! I read that you rented the flat in the house in 1973, but by that time, we had migrated to Australia - I think we left in about 1969.
I have had no contact with anyone I knew when we were living there - my school friends kept in touch for a while (I went to Maidstone Grammar), but I was only 13 when we left there and it is hard to keep up friendships at that age and across such a huge distance. My best friend in the village was a girl named Vanessa Powney, but I know she passed away in her forties and I never spoke to her after we left England. She lived in the houses we used to call the cowsheds - I don't know if you would remember them, very unusual buildings for that era!!
There were a few names that I remembered from your entries who were also my friends and I think you went to school with some of these people - they were a bit older than me. I used to go down to the Old Mill on Friday nights and play table tennis with Robin Pearson and Ian Seamark, there was another boy too, but I can't remember his name. I do know they fished my sister out of the mill pond once and saved her from drowning!! The surname McKirdy also rings a bell. Are they all still living in the village? The Benhams owned the pottery at that time I think.
I have been back to visit Wateringbury once since we came to Australia and would love to do so again but I wanted to say thank you for putting all this information together, it is a wonderful resource and a great memory jogger for people like me.
I don't think I have many photos left from when we lived there, but will certainly look and will ask my sister Davina if she has any.

Kind regards,
Bernice
<>
If the above jogs any memories of Bernice and or her family  please share it with us. If you remember Bernice and would like to get in touch please send me a private email and I will pass it to her.

Any redistribution or reproduction of part or all of the contents in any form is prohibited other than the following:

· you may copy the content to individual third parties for their personal use, but only if you acknowledge the website as the source of the material

You may not, except with our express written permission, distribute or commercially exploit the content. Nor may you transmit it or store it in any other website or other form of electronic retrieval system.